The Hebrew University of Jerusalem

Panel A: Interactions among Nomad, Semi-Nomad and Sedentary Societies During the Bronze and Iron Age:

Xiaoheishigou (小黑石沟): What can we learn from one grave on metallurgy and the interaction between nomads, semi-nomads and sedentarists during the beginning of the first millennium BCE

Grave no. 1 of Xiaoheishegou (located near Ningcheng city, in the eastern part of Inner Mongolia) is the singular richest grave associated with the so-called Upper Xiajiadian culture and one of the richest graves ever to be discovered in the northern frontier zone of China. Dated to the 9th or 8th century BCE, it contained more than one thousand artifacts, including no less than 500 bronze artifacts. More important than the sheer amount of bronze artifacts is their diversity and points of reference. While some of the bronze ornaments are comparable to those found in many Upper Xiajiadian graves, other artifacts, such as knifes with animal motifs, are similar to those found throughout the steppe area (including Mongolia and central Asia). Some of the bronze vessels found inside grave no. of Xiaoheishigou are clearly of Chinese (i.e. Zhou) origins while other are unique to this grave. Not only the bronze artifacts speak for a wide range of interactions but casting molds, also found inside the grave, raise the issue of production and dissemination of bronze artifacts. The paper will attempt to disentangle the different threads of interaction that are related to the Xiaoheishigou discovery and examine them in the context of early first millennium BCE cultural makeup of Central Asia, Mongolia, the northern Frontiers of China and China proper.

Between the Steppe and the Silk Roads: Globalization and Socialization at the Periphery of Xiongnu Empire

Recent investigations of cemeteries of the Xiongnu empire in the Mongolian Altai have elucidated the participation of both regional and local elites in long-distance interregional networks of interaction as well as intraregional networks of socio-cultural integration. More importantly, these investigations have provided evidence that communities outside of the core territories, and individuals outside of the uppermost echelon, participated in large-scale economic and social networks to a much greater degree than previously understood. By employing models of globalization and socialization as concurrent, rather than sequential, processes, we may demonstrate the ways in which various scales and manners of connectivity overlapped and were integrated into strategies of political cohesion.

A New Development of the Sedentary Society in China: A Perspective on the City System Established in the Han Empire (206 BC—221 AD)

When the Xiongnu Empire was dominating the steppe, the Han Empire (206BC---221AD), its southern neighbor, accomplished for the first time in Chinese history the ideal of Great Unification This achievement was realized by occupying “All under Heaven” (天下) and, more importantly, implementing new unifying institutions. One of the most significant new institutions was the establishment of a nationwide city system launched since 201 BCE. This city system signifies that the sedentary society in ancient China moved into a new stage, i.e. the numerous settlements located in an unprecedentedly large realm were integrated for the first time. In order to reveal the characteristics of this new development, I conducted a research on the Han cities and city system. My study identifies patterns of city distributions and uses a GIS framework for analyzing the city-environment relations. The research revealed that considerations of food production, transportation, political ideology, and military deployment affected the characteristics of the city system. The paper reviews these considerations and analyzes how the Han city system dramatically changed the balance between nomad and sedentary societies in East Asia.

Panel B: The Archaeology of Chinggis Khan: The Mongol Empire in Comparative Perspective

Urbanization and Centrality in Nomadic Empires

Two key concepts to analyze nomadic empires in Inner Asia - urbanization and centrality- are, besides agriculture, the main aspects to be analyzed if we want to achieve a better understanding of the rise and fall of nomadic empires. All three aspects are normally not associated with the typical nomadic way of life, but urbanization and centrality could also give us an idea on how the respective empires tried to control the space/area of their dominion. The talk will show some examples of our present state of knowledge and compare the archaeological remains of the empires, emphasizing the example of the Mongol Empire.

The Progress of Middle Age Archaeology in Mongolia

The paper reviews the main recent discoveries, sites and projects in the archaeology of Mongolia's "Middle Ages", from the Turkic period (6th-8th centuries), through the Uiguhr empire (744-840), the Kitan Liao period (10th-12th centuries) and up to the Mongol Empire (12th-14th centuries). These various new developments, mostly carried out by international teams (from Holland, Japan, Russia, Germany, China, Korea and the USA) suggest that the study of the archarology of Mongolia's Middle Ages is now entering into a new stage.

Urbanization in the Liao and Mongol Empires: A Comparative Analysis

The urbanization processes in Mongolia and East Baikal during the periods of the nomadic empires of Liao (907-1125) and Mongol-Yuan (1206-1368) are addressed in this paper. The Kitans built large cities with gorgeous temples and palaces to house the imperial court and the emperor's officials. There were about fifty known Kitan towns. In 2004-2012, the fortress settlements and towns of the Liao Empire on the territory of Mongolia were surveyed. Block structure of the town’s layout was found in this horizon, and the presence of deported Bohai people was discovered. The Kitans have also raised a great wall for protection against early Mongols (745 km). Along the wall, paired fortresses - round and square - were located with intervals of 40-50 km. During the Mongolian period, the model of urbanization have changed. Excavations of the palace country-seats of Khirkhira, Kondui, and Alestui and the burial ground of Okoshki in the East Baikal area have begun. The excavations of these towns show that their population was international. The Mongols quite soon after the establishment of their empire felt the deficit of trained specialists in various trades. Moreover, they understood even sooner that a qualified specialist was as important a resource as the cattle or the material goods. By means of forced relocation of a large mass of people, or through co-opting a vast number of adventurers, profiteers and gentlemen of fortune, the Mongols set up the conditions for an unprecedented intercultural exchange and integration of cultures, religions and civilizations. An example of this multicultural interaction is Kharkhorin - the Capital of the Mongol Empire.

The environmental context of the Mongol Empire, the largest contiguous land empire the world has ever known, is poorly described. At its peak in the late 13th century, the empire influenced areas from the Hungary to southern Asia and Persia. Powered by domesticated herbivores, the Mongol Empire grew at the expense of agriculturalists in Eastern Europe, Persia, and China. What environmental factors contributed to the rise of the Mongols? What factors influenced the disintegration of the empire by 1300 CE? Until now, little high resolution environmental data have been available to address these questions.

We use tree-ring records of past temperature and precipitation to illuminate the role of energy and water in the evolution of the Mongol Empire. The study of energetics has long been applied to biological and ecological systems but has only recently become a theme in understanding modern coupled natural and human systems. Because water and energy are tightly linked in human and natural systems, studying their synergies and interactions make it possible to integrate knowledge across disciplines and human history, yielding important lessons for modern societies. We focus on the role of energy and water in the trajectory of an empire, including its rise, development, and demise. Our research is focused on the Orkhon Valley, seat of the Mongol Empire, where recent paleoenvironmental and archeological discoveries allow high-resolution reconstructions of past human and environmental conditions for the first time.

Our tree-ring reconstruction of hydroclimate, from 949-2011 CE, indicates that the period 1208-1226 CE, during the expansion of the Mongols, is one of the longest and most consistent pluvials in our millennium long record. Inferred temperature from a nearby millennium-long tree ring record indicates warm conditions beginning in the early 1200's and ending with a plunge into cold temperatures in 1260. Abrupt cooling in central Mongolia at this time is consistent with a well-documented volcanic eruption that caused massive crop damage and famine throughout much of Europe and Asia. In Mongol history, this abrupt cooling also coincides with the move of the capital from Central Mongolia (Kharkhorin, aka Karakorum) to China (Beijing). In combination, these tree-ring records of water and temperature suggest that 1) the rise of the Mongol Empire occurred during an unusually prolonged period warm and wet climate and 2) the transformation of the Empire occurred following a plunge into cold and drier conditions in Central Mongolia.

As part of a recently funded National Science Foundation project, we will also be using data from historic documents, ecological modeling, and lake sediments to investigate how the expansion and contraction of the empire was related to moisture and temperature variability. Our tree ring record from central Mongolia extends from 90 BCE to 2011 CE, but is poorly replicated prior to about 200 CE. In future work, we will sample additional lava flows in central Mongolia to add site replication and greater temporal depth. This effort could be further enhanced with archeological samples from prior to 200 CE. Our long record could also be used for dating wooden archeological samples from about 200 CE to present.

The ’Far West’ Perspective: The Archaeology of Nomad-Sedentary Interactions in the Near East during a Period of Change - 6th-11th Centuries CE

Anatoly Khazanov's article "Mohammad and Jenghiz Khan Compared", published twenty years ago in 1993, provides one of the very few attempts of a comparison, based on an anthropological approach, between the Muslim and Mongol expansions. While Khazanov focused on the "religious factor in world empire building", this presentation takes a "bottom up" approach based on archaeological findings, to evaluate the roles of nomad and sedentary societies in the process of political, cultural and religious change in the Near East during the second half of the first millennium.

The process of change, as reflected in hundreds of surveyed and excavated sites in the Levant, raises many questions about the nomads’ part in the crystallization of the Muslim empire. The notion of nomads as the movers and shakers of the new religious and political power is challenged by archaeological and epigraphic material which indicates the existence in central and northern Arabia of developed and multi-resourced societies, supported by an economy based on agriculture, herdsman husbandry, mining and industry.

This updated picture of pre-Islamic societies and their contacts with the Mediterranean and the Near East empires — Byzantium and Persia, shed light on some interesting issues concerning the interaction between desert and steppe societies and their neighboring empires. Looking toward Central Asia and China from a Near Eastern perspective, contributes a new dimension for comparative analysis, focused on the archaeological evidence as a major proxy. 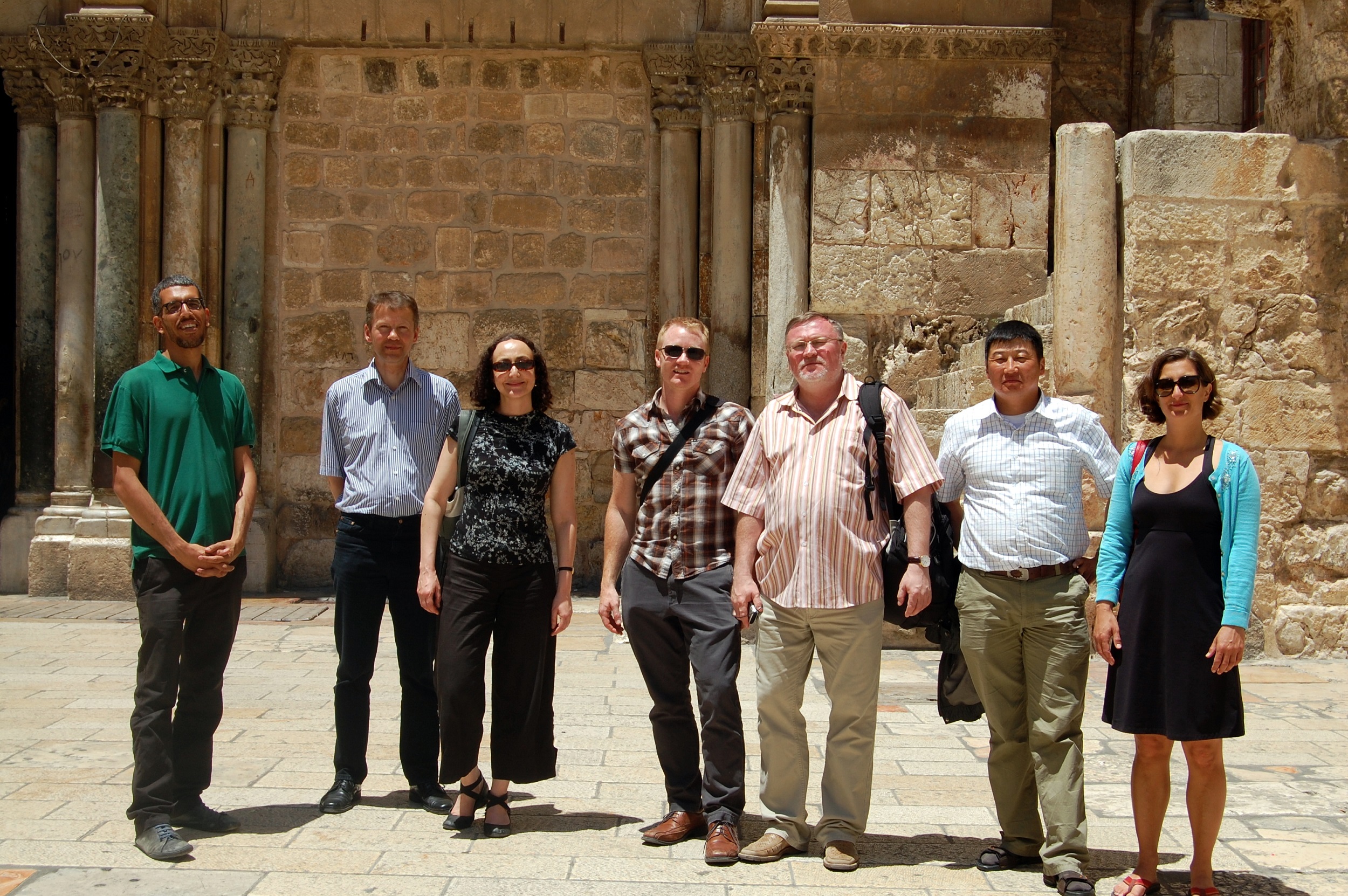 The workshop is supported by the Humboldt Foundation with the participation of The Frieberg Center for East Asian Studies and the ERC project Mobility, Empire and Cross Cultural Contacts in Mongol Eurasia.