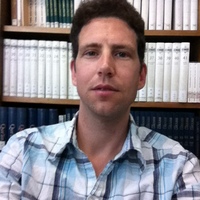 Description of the personal project:

My thesis, which is based on my Ph.D. dissertation, focuses on the Manṣūriyya regiment, the mamluks of sultan al-Manṣūr Qalāwūn. It traces the lives of these mamluks during the career of their master Qalāwūn (ca. 1260–1290), the period they ruled the Sultanate of Egypt and Syria de jure or de facto (1290–1310), and their aftermath, during the third reign of sultan al-Nāṣir Muḥammad b. Qalāwūn (1310–1341). Based on dozens of contemporary Arabic sources, I examine the political and military events of the turbulent Manṣūriyya period, as well as the basic military-political principles and socio-political practices that evolved during this period. I try to show that the Manṣūriyya period marks the beginning of the demilitarization, or politicization, of the Mamluk sultanate.

2002-2005: M.A. The Department of Islamic and Middle Eastern Studies, The Hebrew University of Jerusalem. Title of M.A. Thesis: The Kitāb Futūh al-Shām of al-Qudāmī as a Case Study for the Transmission of Traditions about the Conquest of Syria. (Supervisor: Prof. Amikam Elad).

2005-2012: Ph.D. The Department of Islamic and Middle Eastern Studies, The Hebrew University of Jerusalem. Title of Ph.D. thesis: The Mansuriyya in the Mamluk Sultanate (1290-1310): Political, Social and Cultural Aspects (Supervisor: Prof. Reuven Amitai).

2012 (March) – 2014 (March): Marie Curie Postdoctoral Fellow of the Gerda Henkel Foundation. The Ludwig Maximilian University of Munich, Germany. Project title: The Middle East between the 11th and the 15th  Centuries: The Institutionalization of Islamic Religious Scholarship and Sufism and its Impact on the Jewish Leadership.

1999-2001: The Dean’s List for Outstanding Students. Faculty of Humanities. The Hebrew University.

2001-2003: Fellowship for Outstanding M.A. Students in the Humanities. The Hebrew University.

2002: The Rector’s Prize for Excellence in a Master Studies. The Hebrew University.

2006: Award for Distinction, The Nehemia Levtzion Center for Islamic studies.

2004-2007: Research assistant. Dept. of the History of the Jewish People. Project title: The Leadership of the Maimonidean Family in Eastern Jewish Communities (Prof. Menahem Ben-Sasson).

- The Rise and Fall of a Muslim Regiment: The Mansuriyya in the Early Mamluk Sultanate. Bonn: V&R UniPress, 2015.

- "Spectacles in the Muslim World: New Evidence from the Mid-Fourteenth Century" (in collaboration with Dr. Keren Abbou-Hershkovitz). Early Science and Medicine 18.3 (2013), pp. 291-305.

- "The 'Manṣūrīyah Legacy': The Manṣūrī Amirs, their Mamluks and their Descendants during al-Nāṣir Muḥammad's Third Reign and after" - Forthcoming title. Mamluk Studies Review.

- "The Early Experience of the Mamluk in the Bahri Period of the Mamluk Sultanate (1250-1382)" – Forthcoming title.  Proceeding of the international conference: Slavery and Slave Trade in the Eastern Mediterranean (11th-15th Centuries).

2005, 1 December. Ben Zvi Institute, Jerusalem. The Formation of the Muslim Society in Palestine: from the 7th century to the Crusaders: "The Beginning of Muslim Historiographical Tradition".

2008, 20 May. University of Haifa. The 32 Annual Conference of Meisai (The Middle East & Islamic Studies Association of Israel): "The Mansuriyya in the Mamluk Sultanate – Cultural Aspects".

2009, 20-21 January. The Hebrew University of Jerusalem. Leisure in Islamic Societies: "The Banquet in the Mamluk period".

2013, 13 May. The Ludwig-Maximilian-University of Munich:  "The Middle East between the 11th to 15th Centuries: The Institutionalization of Islamic Religious Scholarship and Sufism and its Impact on the Jewish Leadership".

2014, 2 January. The Hebrew University of Jerusalem. Mandel Postdoctoral Fellowship Lecture Marathon: “The Position of the Jews in the Mamluk Sultanate: The Court Physicians”.

2014, 11-16 June. The Hebrew University of Jerusalem. The Mamluk Sultanate from the Perspective of Regional and World  History: Economic, Social and Cultural Development in an Era of Increasing International Interaction and Competition: “The Origins of the Sufi-Natured Bureaucracy in the Mamluk Period”.

2014, 29 October – 1 November. Organizer of an international conference: Muslim-Jewish Relations in the Middle Ages: Jews in the Ayyubid and Mamluk Periods (1171-1517). (The Annemarie Schimmel College “History and Society during the Mamluk Era, 1250-1517” at the Rheinische Friedrich-Wilhelms Universitat Bonn). Lecture title: “The Origins of the Sufi-Bureaucratic Leadership of the Maimonidean Dynasty: The Institutionalization of Islamic Religious Scholarship and Sufism in the Middle East (11th-14th century)”.

2015, 25-27 June.  The University of Liege, Belgium. The Second Conference of the School of Mamlūk Studies. Lecture title: “Between Tension and Symbiosis: Turco-Mongolian and Arab Cultures in the First Mamluk Period (1250-1382)”.