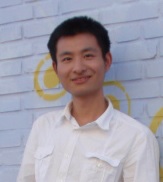 Khitā’i is a Persianate indigenous term that addresses things considered from China. My dissertation project examines how Khitā’i aesthetic was entangled in the shaping process of Timurid dynastic visual culture in pre-modern Central Asia and Iran (ca. 1370-1506). This study investigates the Timurid reception and integration of the Khitā’i artistic materials, techniques, images as well as the concomitant styles and forms, which unfolds through the intensive contacts and interaction among Iran, Central Asia and China in the post-Mongol Eurasian framework.

To challenge the previous monolithic definition of “Chinese” influence, I looks at the discursive and aesthetic formation of the Khitā’i idiom in the Timurid context, which dynamically responds to sources of various origins, including the precedent Ilkhanid reworked Chinese motifs, Central Asian nomadic themes, and the newly fabricated visual languages in the contemporary Ming court (1368-1644). Furthermore, adopting a transcultural perspective, this study seeks to go beyond a simple identification of certain “Chinese” characteristics on the Persianate visual productions of certain media; rather, it highlights the role of the Timurid patrons and artists as active agents, and investigates “the processes of interaction that are constitutive of art practice−such as copying, translation, adaptation, reconfiguration, even refusal or resistance” (Juneja). In this sense, this study can hopefully contribute theoretically to the field of Persianate art history.

Throughout the research, I highlight the function of the Timurid princely kitābkhana (workshop) as a generative mechanism, and closely track the impact of the Khitā’i aesthetic on the workshop practices in a micro level, with a focus on the artist`s preparatory sketch assembled and preserved in several albums (muraqqa‘). The study addresses the codification of Khitā’i aesthetic as a process of making, and explores how Khitā’i material, technique and image were produced, preserved, perceived and eventually canonized. It thus extends the understanding of Persianate artistic practice and institution, and uncovers the global dimensions of early modern Persianate art.

波斯和中国：帖木儿及其后〔Persia and China: from the Age of Timur Onward〕, Beijing: Commercial Press, 2015 (in Chinese).

-“从波斯到欧洲：‘中国公主’故事传播的另一个维度〔From Persia to Europe: The Flow of ‘Chinese Princess’ as a Persian Literary Motif〕.” 东方学刊〔Oriental Studies〕 ,v. 2, forthcoming. (in Chinese).